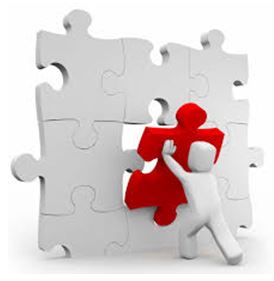 MICHAEL GORDON was unemployed when he signed up for Eugene Hodge’s career class at Quinnipiac College in Hamden. Mr. Hodge offered this solution: Go discuss it with 10 or more people a week. With few alternatives, Mr. Gordon went to the New Haven green and started talking to strangers about sports, gradually steering the conversation his way: He had certain skills, he wanted to work with computers, what did the person think about it?

He grew less timid as he saw the payoff: Lawyers and other professionals were giving him encouragement, advice and leads. One tip led the former parking valet to Microtech International in East Haven and a temporary job that could open doors in a high-tech field. ”I found that there is so much more out there because someone else was telling me about it,” Mr. Gordon said. ”I went down different avenues I never would have known about.”

The class he took is called the Job Readiness and Computer Literacy Training Program. Mr. Hodge introduced it at Quinnipiac after several years at Gateway Community College in New Haven and other places. The kind, but no-nonsense adjunct professor, popular among his students, invented the course while rising through the corporate ranks in computer-oriented positions at the Cigna Corporation, Pitney Bowes and the Federal Reserve Bank of Boston.

His theory is that companies today want workers who are doing what they like to do, what comes naturally to them, and they also want workers to be computer literate. He tells stories of students from factory workers to Ph.D’s who say these ideas helped them get off unemployment and start turning their careers around.

Of the 720 people who have taken the course in the last several years, 88 percent found work during or soon after completing it, he said, with salaries ranging from $8 to $75 an hour. One student started a new job in the Middle West as a construction engineering manager before finishing the course, and convinced his new employer to fly him back for the remaining classes.

Mr. Hodge seeks out the most promising applicants based on a questionnaire on their accomplishments and goals.

”I want people who want something, and they don’t know how to get it. I only want those. I don’t want people who need to be pushed,” he said. He also wants to reach such people by offering the course in educational institutions throughout the country. He is looking for support from corporations, foundations and other sources, specifically $150,000 to hire sales, marketing and training staffs. Connecticut Department of Labor funds, which helped launch the program at Quinnipiac in Hamden, have run out, and he would also like money to help students who can’t afford the $1,300 tuition the college is now charging.

In some ways, it’s been difficult promoting a course that many traditional educators would consider ”radically different,” Mr. Hodge said. Explaining that society has encouraged people to pursue what they are good at instead of what they enjoy, he throws words like qualifications, attitude and skills out the window. Rather than rely on aptitude tests, he encourages students to look inward for answers, basing their career goals on natural strengths and past achievements. Then he tells them to go out and find out what other people think about them. ”I’ve got a bunch of degrees, but if you don’t like me because I’m black or because I’m tall, it doesn’t matter,” he said. ”The person across the table says, ‘I don’t care what you’re good at. It’s not good enough for us.’ ”

Students are encouraged to be straightforward in assessing each other, even if it means talking about ”the scar on your face or how thin your hair is.” The idea is to face reality, change or accept it, then move on to other things, Mr. Hodge said. He also tells them chances at a good job are slim if they don’t understand computers, and he teaches such basics as document and spreadsheet creation, data processing and desktop publishing.
”Especially as employers are going global, and downsizing is forcing people to produce more, the technology is what has limited a lot of people,” Mr. Hodge said. ”The company is moving along, and it needs to know how it can get its people to speak the same language.”

Such ideas impressed the Department of Labor, which usually reserves its support for small and mid-sized businesses, said Janice Hasenjager, program manager for customized job training. The department liked the way Mr. Hodge addressed the rapid changes in the workplace. ”He has been able to place people who have been out of work for a long time,” she said. Mr. Hodge said his ideas for the course came from his own experience. He described himself as ”a youth at risk” growing up in Springfield, Mass., and entering the workplace with ”limited perceptions” that held him back. One day he began listening to the people around him. ”Once I began to follow their direction, things began to open up,” he said. ”I realized people were opening the door for me to go places I’d never been before. I went from almost being fired to being put on the fast track.”

In the classroom, he tries to re-create that office environment with its mix of employees. Students have ranged in age from 19 to 72, and come from a variety of educational and professional backgrounds. One recalled taking the class with a mother trying to get off welfare and a Yale graduate trying to find the best career path.

”When I visit the class, I notice a mix of students, from people laid off from Pratt & Whitney — they were machinists — to Ph.D.’s,” said Edward Kavanagh, dean of the Samuel W. Tator School for Lifelong Education at Quinnipiac. ”The common thread is that these are people who had not expected to be out in the job market, and they needed some guidelines on how to go about it.”

Many of them were finding that the rules had changed since their last job hunt. For instance, while some have computer skills, many have no experience with the Internet, an important job hunting as well as work tool, he said. Students say it also helps to have friends who are truly interested in their plights. Mr. Hodge, they say, encourages them, builds bonds among them and never lets anyone skip an assignment.

Mary Ellen Squeglia of West Haven recalled her discouragement after losing her job in property management. ”I really didn’t have a lot of motivation or enthusiasm at the time,” she said. ”I was really sort of disgusted with everything.” Soon after meeting Mr. Hodge, she found her kitchen table piled with coursework, and realized it was up to her to make things happen. ”He taught us different approaches to use and to never say ‘not’ to yourself.”

She is now in a new industry — having gone from a temporary job at the Yale School of Medicine to another for a pharmaceutical company since the class. ”Really, in a way, temping is an inconvenience,” Ms. Squeglia said. ”Everywhere you go you have to learn something new. But the pluses are you get to see the different workplace environments before being permanent. I never thought I’d be in a medical environment — never, never, never.”
Robert Fiore of Milford, who was laid off as a boiler operator, is also looking at new possibilities He once had a job in a hotel and wanted to return to the industry, but needed skills. ”When I started working in the industry, you just needed to have a good pen, a smile and a lot of refills for the pen,” he said.

”Now, you go for a job interview and you have to be computer literate.”After realizing that he could get where he wanted if he developed the right skills, Mr. Fiore is now dreaming of managing a hotel, and ultimately owning his own hotel and restaurant. ”I feel I have the foundation,” he said. ”It’s a matter of taking what I have and polishing it.”

"We are what we repeatedly do. Excellence, therefore, is not an act but a habit." Aristotle